My Father's Day Present to Me: Swords & Wizardry 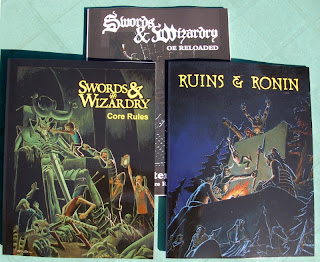 While I was at North Texas RPG Con a few weeks ago, I got the chance to play in one of Bill Webb's Swords & Wizardry adventures. The six-hour session was terrific fun. I've read the S&W White Box and Core Rules PDFs numerous times, but this was the first time I actually played them at a table. It wasn't exactly a new experience, since I've played my share and a bit more of OD&D, but it was so much fun and so easy to play (compared to our efforts a few years ago to play OD&D itself from the three Little Brown Books) that I decided to reward Frog God and Mythmere by spending some actual money on Swords & Wizardry.

Almost all of my RPG purchasing these days is PDFs, since I actually like reading them on my tablet. (That's how I write and run most adventures, now too: directly from my tablet using Evernote.) I hit Lulu.com, found suitable versions of the Core Rules and Monster Book, and grabbed Ruins & Ronin at the same time just because it's so cool (I came this close to running a session of R&R at NTRPGCon this year). While I was there, I grabbed the full six-issue run of Knockspell PDFs, too, based almost entirely on their tables of contents that indicated one issue contained guidelines for constructing an adventure using Scrabble tiles. I love that sort of thing ... .

The books arrived from Lulu quicker than I expected. The covers are a bit dark, but that's a print-on-demand thing. (Tip to publishers: if you do POD through Lulu or just about any other service, it's a good idea to not go with severely dark covers, because they'll darken up more in the printing process and look muddier than you'd like. The S&W White Box image is much lighter to begin with, so it probably turns out crisper.) Otherwise, the physical quality is very good, as I've come to expect from Lulu.

What's more, I've been enjoying Knockspell immensely. I've only finished issue #2, and already I consider the $5/issue that I dropped on the PDFs to be money well spent. "Isles on an Emerald Sea #2" is terrific. The Isle of Barzon has more old-school flavor than most of the "this here is old-school" settings I've seen. It could have been lifted directly out of one of Lin Carter's Thongor the Barbarian novels or one of Howard's lesser known, non-Conan tales. I'd have paid $5 for that one article. The rest of the issue is gravy.

Despite the fact that I seldom buy physical books anymore, my OSR bookshelf is getting crowded. Swords & Wizardry joins Labyrinth Lord, Adventurer Conqueror King System, Lamentations of the Flame Princess, Dungeon Crawl Classics RPG, Astonishing Swordsmen & Sorcerers of Hyperborea, and Mutant Future, along with an assortment of adventures (Barrowmaze I and II, Stonehell Dungeon) and supplements (Realms of Crawling Chaos, the LL Advanced Edition Companion, The Majestic Wilderlands). Most of these I got for free -- one of the perks of working in the industry. That by no means cheapens them in my estimation. If anything, I value books and games I was sent for review, or as an entrant in the Three Castles Award, or simply as a thank-you, higher than the things I buy for myself.

In the '70s, we mixed OD&D, Holmes, AD&D, and variants from The Dragon, Judge's Guild, Balboa, ourselves, and God-only-knows who else, and somehow made it all work. When it comes to old-school roleplaying, I default to D&D B/X, mainly because it's my favorite edition and I still have the books in good shape. But when you get right down to it, I really don't care whether I'm playing D&D B/X, OD&D, Labyrinth Lord, Swords & Wizardry, Basic Fantasy RPG, Searchers of the Unknown, Castles & Crusades, ACKs, DCC, or something else. In the final analysis, they're all basically the same; they're all basically D&D, and that's what I come to the table for.
Posted by Steve at 12:00 AM 1 comment: