The New Death and Others 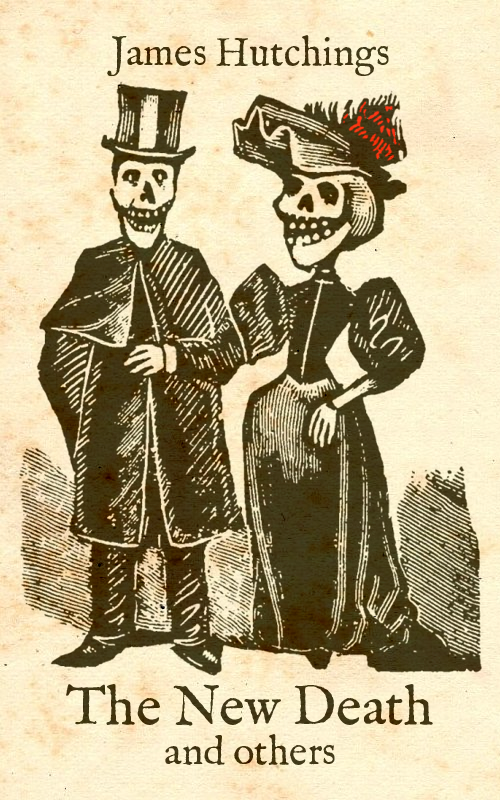 About two weeks ago, I received a copy of the ebook The New Death and others by James Hutchings. The author asked whether I could find the time to review it and give it a nod on Howling Tower if I found any gaming inspiration in its pages.


I didn't recognize Hutchings's name immediately but I should have, because I've enjoyed his work for years. Hutchings is the force behind ageoffable.net, a website that every DM ought to be familiar with. Age of Fable is one of those online funhouses that offers so much quirky creativity it's tough to decide where to explore first. The centerpiece is Age of Fable, a fully illustrated, online choose-your-own-adventure game. Are the illustrations inspired by the text or vice versa? The truth is a mix of both, I suspect. Its roots go deep into those Tunnels & Trolls solo adventures from the '70s and '80s, and that's not a bad thing at all. Age of Fable is great fun, with almost every click leading to something surprising, whimsical, deadly, or all three.


Along with Age of Fable, the website offers a dungeon generator that churns out labyrinths for both Dungeons & Dragons B/X (and its retroclones such as Labyrinth Lord, OSRIC, or Swords & Wizardry) and Tunnels & Trolls, along with hundreds of tables for instantly creating anything from monsters and treasures to character backgrounds to fantasy nations. The useful tools at ageoffable.net are simply too numerous to list.


So what about The New Death and others? The book is a collection of 44 stories and 19 poems by Hutchings. All of them are very short; only a handful are more than a few hundred words long. They fall into two distinct styles. One group evokes the writing of Poe, Lovecraft, Howard, and especially Clark Ashton Smith. Some of these, such as "Under the Pyramids" and "The Garden of Adompha," are straight-up homages, being poems unabashedly based on the short stories of the same names. Others do an excellent job of mimicking the style of those writers while covering original ideas. Stories in the second group are written as fables and myths, frequently with the Fates themselves or characters from well-known fairy tales as their chief actors.


The surprise is that so many of these stories and poems are humorous. That's not to state that they aren't dark, gritty, and tragic, but Hutchings also mines them for all the satire, parody, absurdity, and cynicism he can dig out. And he digs out a lot.


Most of the stories in The New Death and others are parables on pop culture, fame, human foibles, money, relationships, life, and death, couched in the language of Lovecraft and Smith and the Brothers Grimm, with a heavy dose of Douglas Adams mixed in. A few examples:

Wondering if any of this is for you? Here's an example of one of Hutchings's shortest poems (one of my favorites), "If My Life Was Filmed."


If my life was filmed, it would
go straight to DVD
and someone who was famous once
would have the role of me
and if five stars meant 'excellent
you'd give it two or three
and most of those who rented it
would watch ironically.


Years later they would track me down
and do an interview.
They'd say "I heard you died," and I'd
say "Yeah, I heard that too."
"Is any of it fictional?"
"Perhaps a scene or two.
There weren't as many ninjas, but
the rest is mostly true."
It's not perfect. There are typos, and a certain redundancy to some of the tales. It's best if you read just a few at a time, then put it away for a bit before coming back. But those are minor flaws.


As to the original question -- whether these tales provide fruitful inspiration for DMs -- I'd say yes, but no more than you'd get by going straight to the primary sources of Lovecraft, Smith, and traditional mythology. Really, that question misses the point of the book. While the pure fantasy tales are enjoyable and well written, they're secondary to the cynical, satirical, hilarious parables about politics, religion, and human interaction. I laughed out loud at Hutchings's humor and clucked over his insights more times than I can recount while reading The New Death and others, and my verdict is unequivocal -- Grab a copy. For 99 cents, it will be the best entertainment purchase you make in 2012.


"The New Death and others" is available at Smashwords, Amazon, and Barnes & Noble, in most ereader formats.
Posted by Steve at 1:53 PM