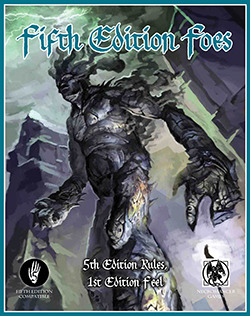 I've been terribly remiss in not promoting this project here at the Howling Tower, but it's not too late yet. I've been working with the great crew of Necromancer Games (essentially the same team that's behind Frog God Games) on a Kickstarter project for three 5th Edition support books: Fifth Edition Foes, The Book of Lost Spells, and Quests of Doom. Rather than me telling you about it here, I urge you to check out the Kickstarter page itself. The campaign has less than three days to go, so if you want in, now's the time to jump.

These three books are what's been eating all my time since wrapping up work on the Tyranny of Dragons set of adventures for Wizards of the Coast. Converting monsters and spells to the new system has presented a chance to really delve into the design of 5E and see what makes the system tick.

I can't guarantee that every monster and spell in these books will be structured exactly the way the design team at Wizards would do it -- but that's largely the point. The PHB is already filled with spells designed the Wizards way, and the Monster Manual will be filled with great monsters by the same team. I know those guys, they're my friends, and I have nothing but respect for their work. Everything they've done for 5E is top notch.

The Necromancer approach is slightly different, especially where monsters are concerned. The project's slogan -- "Fifth Edition Rules, First Edition Feel" -- does a good job of summing that up. Read the Kickstarter page and check out some of the online previews for more info.
Posted by Steve at 4:12 PM