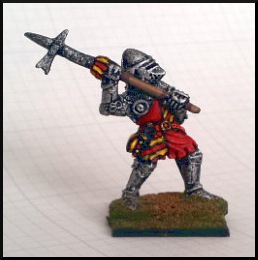 Writing about the Weapon vs. Armor table got me thinking about weapons in AD&D, and that dialog always, inevitably, eventually swings 'round to polearms. And whenever polearms come up, I drag out one of my favorite bits of surprising etymology. Did you know ...

That the "pole" in poleaxe is actually an alteration of poll? The  original word was "pollax," being a combination of  poll + ax. In Middle English, poll meant head. We still use the word that way when we talk about taking a poll--it's a literal reference to counting heads. With its long handle, the pollax could deliver an awesome downward strike that would demolish a helmet and crush or split an enemy's head, or poll; hence the name.

As poll drifted away from meaning head in everyday use, the similarity between poll and pole took over, and it was natural to think that pole referred to the weapon's handle rather than its target. But the name is more graphic than that; the pollax is literally a head-splitter.