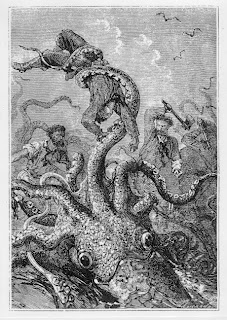 It's Tuesday, which means Howling Tower appears at Kobold Quarterly. Today's topic is the second part of a look at cosmic horror in heroic swords & sorcery adventure.

When swords & sorcery heroes come up against cosmic horror, there is a chance that the characters themselves will catch a whiff of the universe beyond, whether or not they want to. Most horror games deal with that corrupting influence through some type of psychic decay or sanity countdown. Such mechanisms aren’t well suited to heroic fantasy. Heroes are resilient. Besides, no one really wants to see Fafhrd reduced to a drooling, babbling idiot.

Just seeing something frightening shouldn’t be a problem; heroes deal with gut-wrenching nastiness all the time. Even so, exposure to inhuman forces is dangerous. Studying the notes of a deranged sorcerer puts your psyche and soul at risk, as does inhaling the mind-altering perfume of the lilies of Leung Poq, being cut by a blade made from meteoric iron (who knows what outerworldly toxins lurk in the spaces between its atoms?), casting spells in moonlight on a night when the visible and invisible moons align, returning from the dead, or taking life among cyclopean, dream-haunted ruins.

If heroes are not subjected to slow, long-lasting degeneration through loss of sanity, stability, or whatever you choose to call it, then what is the price of confronting cosmic horror? I think any of the following are fair game in a heroic fantasy RPG.
(Read the rest at Kobold Quarterly ...)
Posted by Steve at 4:08 PM