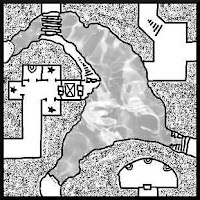 Even the king of the gnolls needs a safe cave in which to hide his treasure. Nothing, of course, is safe from adventurers who are bent on riches or glory.

Since Next Innovator raised the subject of the location's puzzle in a comment, it probably deserves a few words of expansion. Because of the space limits inherent in Adventure Notebook, the puzzle is more brief than it ought to be. These constraints made it impossible to provide clues to how the puzzle should be solved. If it's played strictly as written, players will either guess right or guess wrong and that's that. A guessing game is not a puzzle. In play, I would embellish these bare bones with hints and feedback based on what the characters are doing. None of that feedback is written down, it's just something that I do, and I encourage other DMs to do the same. Insert whatever type of clues and feedback your players will respond to. You know what catches their eyes and sparks their neurons better than I do, anyway. These Adventure Notebooks are predicated on that type of improvisation.