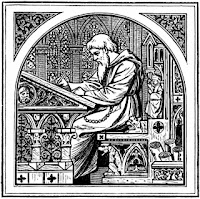 A week ago was Friends Friday. Today will be Me Friday. Here's what I'm working on currently.

1. A big 4E city adventure. This is the longest chunk of anything that I've written for a while, at 65,000 words. That's great for me, because after a decade of publishing short, daily material on the web, I've missed really sinking my teeth into a subject.

2. Planning for Kickstarter. Two fantasy projects are firming up in my brain for Kickstarter campaigns. Both ideas have percolated in my head for two decades or more, waiting for the right combination of timing, financing, and opportunity. They never got any traction at TSR, which probably ought to make me wary, but Kickstarter is the perfect venue. They'll be geared toward Labyrinth Lord as the system of choice, with conversions to other OSR systems and possibly to Pathfinder, 4E, and even 5E, depending on funding and legal terms. I'll have a lot more to say about these in the future, obviously, but one is an adventure with a peculiar theme and the other is a campaign setting.

3. Some D&DNext conceptual stuff. This project involves putting together an optional rules module for D&DNext. I can't disclose much more than that for contractual reasons, but it's a subject that's close to my heart and I'm digging it. Probably a bit too much, because I was already behind schedule when I had to set it aside to tackle the city adventure on a short turnaround. (When I fall behind on a schedule, it's usually because I'm having too much fun and don't want to stop working. Jim Ward calls this affliction designeritis.)

4. Coming up sometime soon in Dungeon online will be "The Blood of Gruumsh," a 4E adventure for heroic tier characters. PCs explore a lost elven religious colony and uncover some buried secrets that certain followers of Corellon would rather not see exposed.

That's a whole lot of vagueness amounting to little more than "I'm writing things I can't talk about yet." But soon I will be free to talk about them, and I hope that all of you will find them as exciting as I do now.