Where S&W is a straight-up adaptation of OD&D that stays true to the original game's non-setting, C&T packages those rules with a very particular approach to campaigning. What you get in C&T is an S&W-esque game in the world of Zarth, a setting heavily flavored with great dollops of the Hyborian Age, Melnibone, Nehwon, Zothique, and Xiccarph.

Right there I've listed the works of four of my five favorite authors, so it should come as no surprise that I like C&T.

D101 does many things right straight out of the gate. The first thing is including on page 4 a sidebar titled "How is Crypts & Things Different from Swords & Wizardry Core?" Players who already know S&W don't need to pore through the whole C&T book looking for departures from the standard rules. Since that's the sort of thing you'd like to know in a review, here's the list:


The standard S&W character who gets back on his feet with 4 hps might get lucky the next time something hits him and take only 1-3 points of damage. In C&T, there's no buffer; healing gets you to 0 hit points, and any hit is going to drop you back into Con damage territory. This is a different approach to the problem of giving low-level heroes a chance to survive, but it does not make low-level characters significantly more robust than just saying they die at, say, -5 hps. You need to get lucky on saving throws to keep battling on heroically after all your hit points have bled out onto the cold stone floor, especially at low to mid levels. When your hit points are gone, you're probably going to face-plant into the dust like any other dumb sack of spuds.


The magician class is, as far as I know, unique to Crypts & Things. Superficially, magicians look a lot like OD&D/S&W magic-users. The workings of magic, however, are entirely different in C&T. Spells are divided into white (beneficial), gray (manipulative), and black (destructive and "contrary to nature") schools. White magic is cast normally. Casting a gray spell costs the wizard hit points equal to twice the spell's level, the same as if he'd been struck with an arrow. Merely to memorize a black magic spell, the magician must either sacrifice a sentient creature or lose Constitution points equal to twice the spell's level. When a black magic spell is cast, he must make a saving throw or lose Sanity points equal to the spell's level. This begs a puzzling question that isn't overtly answered in the rulebook: When a magician loses Con for memorizing a black magic spell, must he make a saving throw to avoid falling unconscious for eight hours? Does he suffer the -2 penalty on attack rolls and saving throws for having reduced Con? The rules don't say otherwise, so I assume the answer to both is yes, but this being a Swords & Wizardry variant, every DM is free to draw his or her own conclusion. I foresee black-magic users spending weeks prepping for an adventure: memorize fireball, then lay up six days recuperating from the effort before memorizing snake charm and spending another six days in bed (attended by a bevy of undead slaves and serpentman healers, no doubt).

Note that none of these changes make magicians easier to play than standard magic-users; in fact, they all work against magicians. The most powerful spells injure the caster one way or another. Two things are offered to mitigate that blow. First, magicians are allowed to wear leather armor. That's a nice, if small, concession. Second, magicians with Intelligence 15 or higher "earn" an extra 1st-level spell. The word "earn" is unfortunate in this context. It's not clear whether it means smart characters start with an extra 1st-level spell in their spellbooks, or they can cast one extra 1st-level spell per day. Option 1 is OK but doesn't help much in the real adventuring world, since 1st- and 2nd-level characters tend to stick to just one or two spell choices anyway. The latter is a major boost that would go a long way toward compensating magicians for the other handicaps.

Such worldbuilding-by-rules enforces a different style of D&D onto a Crypts & Things campaign. I support that approach. Even "generic" D&D forces assumptions onto the setting. C&T's assumptions seem fairly carefully chosen to steer play into a hard-edged, weird swords & sorcery style. If you dig that sort of thing, then this is a solid approach.

Combat is exactly what you expect. There are no surprises in this chapter for players of Swords & Wizardry or OD&D, except for the hit points + Constitution rules mentioned earlier. Other than being divided into white, gray, and black magic and stopping at level 6, the spell list is similar to that in the S&W Core. A few new, Zarth-only spells have been added, such as call the kindly ones and cauldron of blood, but most will be familiar. Raise dead and reincarnation, however, are conspicuously absent. If your character dies at any level of play and no powerful, otherworldly entity owes you a favor, it's time to grab 3d6 and a fresh character sheet.


The monsters are plentiful, and while many of them are things we've seen in every other retroclone, enough of them are unique and tailored to C&T's weird, pulpy setting to hold your interest. 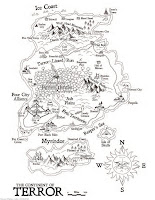 The Continent of Terror is the only part of Zarth that’s mapped and described. The descriptions are brief—just enough to stir a few adventure ideas. That’s by design, as the author states that he wants to provide only an outline and let the DM craft his own version of the world. The Continent of Terror has more in common with Leiber's Newhon than Howard's Hyborian Age in that there are no countries to speak of, just regions, cities, and mysterious locales.

A central idea behind Zarth is that it’s just one of many worlds. All the other worlds are inhabited or overrun by demons or Others, a catch-all term for any monstrous entity. Zarth is isolated and somewhat protected by the Shroud, “a dark and unfathomable magical netherworld that separates our Reality from the Other Worlds.” Unfortunately, foolish ancient sorcerers opened a gateway to these other worlds and left it open. The so-called Locust Star “blazes in unholy glory in the sky above Mount Terror.” Demons come through the Locust Star to plague Zarth—and thus, adventures are born.

Magicians are forced to risk contact with the Shroud when they cast certain types of spells. It probably goes without saying, but dipping your toe into the Shroud is generally dangerous to both body and soul; you attract the attention of Others while you're there. This is a nice touch.

Far and away C&T’s biggest failing--the only one I'm even going to mention--is that the book is lousy with typos.* It pushes the boundary of what’s tolerable even for an amateur publication. I was so exasperated by the errors on my first reading of the PDF that I almost chucked the whole thing as a shambles. Given my long background in editing, maybe I'm more sensitive to editorial flaws than most. If you’re like me, you’ll gnaw on your fingers while reading C&T. But different people place different value on quality editing. Maybe it won't bother you at all. Fortunately, I didn't spot many errors that caused any real confusion; the tables and the substance of the rules were always clear despite the typos.

If you can swallow the rampant typos, Crypts & Things offers a unique twist on OD&D/S&W play. The setting-specific classes and magic rules make Crypts & Things a different experience from the Swords & Wizardry core, and it's one that I'd jump at the chance to play.

* It's been brought to my attention, since posting this review, that Crypts & Things is a British production, and many of what I consider misspellings are actually correct British spellings. On looking through the book, I see that explains many--but far from all--of the spelling issues. In light of that, I'm stepping back from "lousy with typos" to merely "laced with typos."