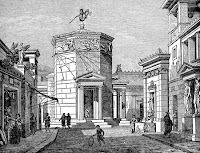 I'll close the week on city maps with a few resources that you might find helpful with your own city mapping.

Start with Google. Hit "medieval city map," select images, and you'll get fold after fold of useful links. Many of them could be copied as-is, relabeled, and dropped into your campaign folder. Replace "medieval" with "ancient" and try again; you'll get another crop. Here are a few of my favorites.


Don't miss Towns of the Outlands from Midkemia Press, published in 1981. Midkemia now makes this available as a free PDF. The booklet describes six fleshed out towns that you can drop into any FRP setting. Follow the Products link to the download page. Cities is excellent too. It's not free, but it's well worth the $5 Midkemia is asking.

Village Book 1 and Village Book II from Judges Guild are invaluable if you want to scatter villages in realistic density across your green and fertile countryside. The PDF scans leave something to be desired, but the price is right at DrivethruRPG or RPGNow.

I'm sure that plenty of you have your own preferred sourcebooks and inspirations, and I'd love to hear about them.

Finally, I can't wrap up a discussion of city maps without praising my two all-time favorites. Both of these fall into the gorgeous poster category; I'm as susceptible to beauty as anyone.

The first is the city of Jakalla from Empire of the Petal Throne. I always thought this map was drawn by Dave Sutherland, but Victor Raymond informed me that it was rendered by Professor Barker himself, who learned to do drafting and keylining in his family's printing business. Technically, it's been surpassed by newer maps, but this was a real stunner in its day. Nothing this ambitious had been done before. 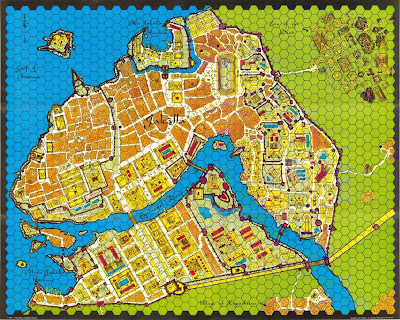 The second is the poster map of Tyr from the original Dark Sun box, drawn by Dave Sutherland (no doubt in this case; I watched him do it). Dave's style is what makes this effort stand out. Elements of Empire of the Petal Throne, grand Hollywood costume epics, and Dave's fascination with ancient cultures all shine through. This poster conveys more of the decadent grandeur of Athas than most of the words written about it. 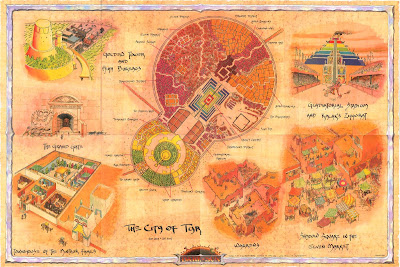