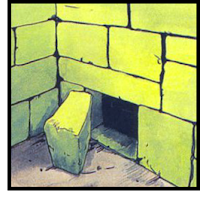 It surprises me (sometimes) how many people voice support for the "no skills" approach to D&D. They're pretty much all old-schoolers; not too many 3rd/4th Edition or Pathfinder players among them.

A common thread running through many of the arguments against skills is that they make things too easy; GMs and players who rely on skill rolls are lazy. This argument is a bit odd on its face, since roleplaying is a leisure activity. I see no reason to bind it in philosophies that make the process strenuous.

That aside, I've observed many campaigns that appeared to depend heavily on skill rolls but in fact relied on GM/player interaction more than either the GM or the players let on or possibly were even aware. This has been true not only in D&D but across many different games, including some that use skill rolls to resolve just about everything.

You know what I'm talking about, For the game to advance from A to C, characters must accomplish B. That task might be finding a door, unlocking a chest, spotting a bloodstain, bending a bar/lifting a gate, persuading the victim's lawyer to let you have a look at the will, etc. The player with the key skill rolls 1 on the check, and the GM reaches for his inhaler.

Several things can happen at that moment. One is, the GM manufactures a reason to allow a second roll: "You didn't find any secret door on the east side of the room. Roll again for the west side." Another is, the GM turns the failure into success but makes it sound as if it could have been much better: "You find a secret door but you can only pry it open about a foot. You'll need to strip off your backpacks and pass them through one at a time." A third is that the challenge passes to someone much less capable: "The elf rogue couldn't find anything, but what the heck, everyone else give it a shot." Inevitably the one-eyed, hook-handed barbarian who doesn't even like doors rolls a 20, saving the day and making Houdini Dorfinder look like a fool.

A fourth option is that the GM slips into the skill-free zone without realizing it: "You didn't find a door, but you discovered a stone in the mosaic that seems out of place." Someone says "I press the stone" and quelle surprise! A door opens. Intentionally or not, another group of players has just experienced the awe and mystery of the OD&D Limits.

In kicking around all these ideas, a way to blend old and new occurred to me. That is, treat skill rolls as insta-finds but keep the notion that if you search long enough (traditionally, 10 minutes per 10-foot square), you'll find what you're looking for. This addresses a separate problem I have with skill rolls -- setting the bar (DC) so low that someone is guaranteed to jump over it. If that's your approach, consider just having the players do two minutes of wrist exercises before the game and dropping the pretense during play. Too many times have I witnessed this exchange.

As always, 10-minute searches have meaning only if the GM values time in an old-school way, and this approach won't appeal to people who dislike skills on principle. It does allow GMs to set skill roll targets high enough so that a successful roll means something while still allowing success through sheer doggedness and increased risk.