A Problem of Perception 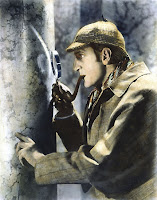 One of the most problematic skills in D&D is perception. The problem is that perception isn't entirely a skill. A lot of it is innate, which implies that perhaps it should be an ability score. Yes, it can be improved with training, but so can strength, dexterity, intelligence, etc. We all know people who are just more observant than others, without the benefit of any special training. It's hard to miss the advantage in games that treat perception as its own ability, whether as a skill or an attribute.

(This begs the question of why skills and abilities need to be separate at all, but that's a bigger question for another time.)

D&D really suffers in this regard. Perception can't have a stand-alone score because there's no spot for it on the character sheet. So what do you tie it to? Wisdom is the traditional choice, but only because it's the least bad option. Wisdom has the unfortunate consequence of making clerics the best scouts. I don't know about you, but that really breaks the archetype for me. I have nothing against clerics; they're some of my favorite characters. But the cleric shouldn't be your go-to guy when someone needs to peek through a keyhole or find a gem stashed in a merchant's mattress. It doesn't make sense from a story angle or a game angle to let the cleric poach in the rogue's forest that way. It was bad enough when the cleric had the find traps spell.

There are four solutions that I can see.

Option 1 is to add Perception as the seventh ability score. I doubt that anyone sees this happening. The six ability scores are enshrined in marble, whether or not they make sense or serve the game. I appreciate as much as anyone why it can't happen.

Option 2 is step backward to earlier editions that didn't rely on skill rolls. It's true; characters used to perceive things without rolling dice. Finding things like secret doors was more a matter of time than observational skill. If you spent the necessary 10 minutes peering at, poking, tapping, and twisting every inch of a 10-foot wall section, you'd find the secret door. If the DM described a few features and you hit on the idea of pressing the gargoyle's left eye, you might find the door right away and save yourself considerable time and risk from wandering monster rolls. This removes a bit of p'zazz from certain character archetypes; playing the eagle-eyed detective who spots things everyone else misses is fun.

Option 4 is to eliminate Perception as a skill. Drive an ice pick into it. When some sort of perception is called for, use the skill that most closely relates to the situation. Here are some examples, in 4th Edition wrapping.

This is my top contender. Not only does it a) work and b) make sense, it also c) steers some attention back onto skills that are all too often overlooked. When was the last time your DM called for a Streetwise check? How do you suppose that makes the bard feel? This approach works so well with the skills in 4th Edition D&D that I wish it had been the official choice.

I'd love to see D&D Next take this direction. It's not headed that way right now, but we can lobby.

Email ThisBlogThis!Share to TwitterShare to FacebookShare to Pinterest
Labels: 5E, next, perception