Keeping Your Balance on the Power Curve 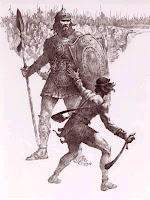 The Legends & Lore column by Mike Mearls on Oct. 8 concerning magic items in D&D Next has set off a predictable flurry of online ... hmmm, let's call it "conversation and debate."

The debate is not just over how magic items should fit into D&D. It goes straight to the mathematical heart of D&D and raises fundamental questions about how the game should work.

The argument boils down to this. If magical bonuses are "balanced" across the system, then they become wired into the game's math so that magical accessories become mandatory if characters are to keep pace with the power curve set by monsters. If those bonuses aren't wired into the math, then even a small magical bonus boosts characters ahead of the monster/NPC power curve and upsets the balance of "level-appropriate" encounters.

The problem as I see it is that those positions assume there are only two ways to deal with the power curve: You either define it rigidly as 3X and 4E did, or you ignore it and punt the problem into the DM's lap, as the original, 1st, and 2nd editions did.

I say a third option deserves a look. That's to develop a simple, reliable way to assess actual character power that looks beyond character level. The rigid systems currently in use assume that all level X characters are equivalent in power. Actually, they don't assume it; they are engineered toward the goal of ensuring it. Every level X character is forced to be equivalent to every other, or so goes the theory.

In practice, it doesn't work. Players rebel against uniformity. There are those who always look for means to pull ahead of the pack, and in a complex system like D&D, ways are bound to be found. Others make suboptimal choices, intentionally or unintentionally, that put them behind. Some DMs give away too much magic juice and others don't give enough. Once the rulebooks leave the warehouse, it's beyond the publisher's ability to control.

So the Average Power of a level X character is a statistical datum that has little bearing on the Actual Power of a specific character. Very few level X characters sit on the average. For a host of inescapable and desirable reasons, most will be some degree stronger or weaker than the arithmetic mean. In a group of five characters, those variations can average everything back toward the center or they can cumulatively create a whopping gap between expectation and reality.

If character level is an inadequate gauge of PC power, that doesn't mean the alternative is having no gauge  The alternative should be to develop a tool that is adequate -- a way to measure a character's effective level as opposed to its XP level, if you will.

I haven't developed such a system nor do I intend to, but I can illustrate how it would be used.


When the DM designs an encounter for these three characters, she knows that 18 ranks of foes, not 15, will give a balanced fight, and that those foes should average around EL 6. The fact that all three PCs are level 5 is irrelevant. They could just as well be level 3 or level 8. What matters is that they function as a group of three characters at approximately EL 6.

The needed component is the system that lets DMs and players assess the real power of a character, accounting for level, ability scores, and magic. It should be easy enough to use so people will actually use it, but it doesn't need to be simplistic. The calculation needs adjustment only when something changes, as when characters go up a level or "inherit" a significant magic item. Effective Level would be more dynamic than character levels but only slightly so.

The benefit, which I see as huge, is that it cuts the wires binding together the XP tables, treasure tables, and monster tables. DMs can be as stingy or as generous as they like with magic swords and girdles, and they won't upset anything. Each campaign can establish its own power gradient unfettered by an official curve that depends on levels alone for gauging power. Whether I equip everyone with vorpal swords and pet dragons, or with bearskin diapers and t-rex jawbones, I'll still be able to put together a balanced, challenging encounter. Whether I want to is another story entirely; at least I'll have the tool.