Chill: Horrors from the Unknown 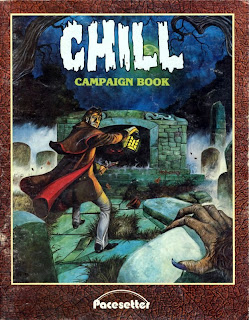 Saturday evening, I'll be running a session of Chill for the Call of Cthulhu group. We like to mix things up now and then, so we've experimented with other rules and other eras. This will be our first foray into Chill.

The last few days have been spent getting reacquainted with the rules. Chill is a solid 1980s game with few pretensions. The designers knew what they wanted, and they cut straight to the heart of the matter. Some people have criticized Chill's use of a universal table for action resolution, but I like it. Chill's is done well and is fairly easy to use (with one small change). Whatever confusion might exist at the start of play disappears after a few uses. It's not flawless by any stretch, but I've played many games with more "elegant" systems that ran less smoothly, so I don't take criticisms of Chill's action table too seriously.

My only disappointment with Chill was over the published adventures. Too many of them were roller coaster rides; plenty of ups and downs but no opportunities to veer off the track. That wasn't true of every Chill adventure, but it afflicted enough of them to leave a general distaste. For this outing, I'm adapting a scenario from Shadows Over Filmland to the Pacesetter rules. Filmland is just about note-perfect for Chill's Gothic atmosphere and emphasis on classic monsters. 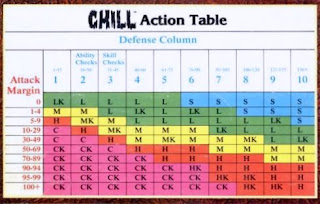 I expect to have a great time revisiting this game with a group of players who've never experienced it. It's given me a chance to re-watch some favorite horror classics from Hammer Films and American International Pictures, as well as to reread old ghost stories for inspiration. I've been steeped in Lovecraft for so long that I'd forgotten how much I enjoy Edgar Poe, Ambrose Bierce, M. R. James, and Reynolds's Mysteries of London.

The crew that formed Pacesetter were all friends of mine: TSR expats looking for greater creative freedom away from the mercurial management and financial follies of TSR. They invited me to come along, and turning them down was one of the hardest decisions I've ever made. It ranks as one of the three major crisis points of my career, and I still wonder from time to time where I'd be now if I'd chosen differently.