Fear and Loathing in Zamora 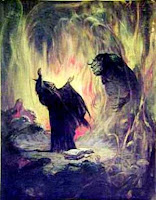 In Tuesday's post about lessons learned from Conan, I mentioned the idea that magic should be feared.

That's a bit of a misstatement; what I really mean is that magic-users should be feared.

Magic is power. Those who study it seek power. Even those who stepped onto the magic path interested only in knowledge wind up gaining power whether or not they want it, and as Lord Acton proclaimed, the simple possession of power threatens to corrupt even the stoutest soul.

In this regard, magic is an almost perfect metaphor. It can corrupt its users not only psychologically but spiritually and physically, too. We have a long tradition of sorcerers who can be identified by their scarred flesh, inhuman gaze, and bizarrely misshapen appendages. Wizards immerse themselves in taboos: they associate with dark forces, study death, and (most likely) challenge or at least question the authority of the gods.

It's the wizard, then, that's feared. Magic use is a symptom of darker purposes and intents, and those are what inspire fear.