Chill: The Night I Died 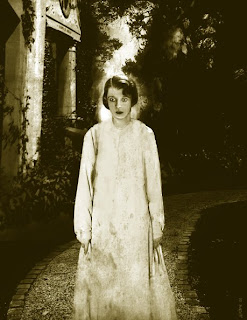 The first half of the Chill adventure came off last Saturday, despite some confusion about the day of the game. Events unfolded almost perfectly from my point of view, and the Chill rules worked fine--though true to form in our horror sessions, we barely called on the rules. That should change soon.

The adventure being played is "The Night I Died" from the Trail of Cthulhu collection Shadows Over Filmland. I chose this adventure because of its creepy Val Lewton-esque atmosphere. Lewton produced mood-heavy horror films such as Cat People and The Body Snatcher in the 1940s. I wanted that type of psychic unease to be central to the story.

It appears to be working so far. The players seem to harbor some actual doubt over whether the main NPC is truly a ghost as she claims or is still alive but deeply psychologically disturbed. And how do the Sumerian god Ereshkigal and the London Zoological Gardens fit in? I can't say more than that because some of the players read this blog ...

The risk with this type of scenario is that what I perceive as players unsettled by the unknown and the supernatural might really be players just frustrated by the unknown. There's no clear, straight path through the mystery. Most Trail of Cthulhu scenarios involve more than the usual amount of sifting clues for meaning and running down leads. I love that sort of thing, but not everyone does.

I'm looking forward to collecting everyone's reactions to the scenario and to Chill after we wrap up the episode. It should reach a conclusion this coming Saturday. I'll post the synopsis and debrief next week.