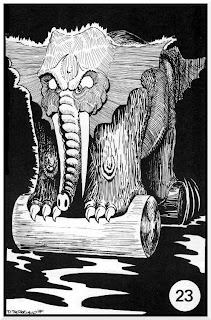 The trap is a D&D icon. Classic dungeons such as Tomb of Horrors and The Hidden Shrine of Tamoachan are famous for their mechanical ambushes. Traps are so central to the concept of dungeons that an entire class—the thief—was developed to deal with them (along with locked doors).

In real life, of course, archaeologists have never had to deal with this abundance of traps in ancient tombs and ruins. No trap of any kind has been found in an excavation: no scything blades, no darts with pressure-plate triggers, not even poisoned needles in treasure chests. Sliding blocks have been used to seal passages but never to squash intruders. Deep pits were dug in the entrance corridors of some tombs, but they were meant only as obstacles. The pits weren’t covered, so only the most irresponsible of thieves risked falling in, and none of them left behind skeletons with broken legs. Tomb architects went to great lengths to keep people out, but no thought was given to killing them once they got in.

GMs need to put some thought into it. Before putting a death trap in that hallway, you need to ask exactly what it’s for. Designing a clever, challenging, logical, dangerous, and yet enjoyable trap is one of the toughest tests facing a GM.