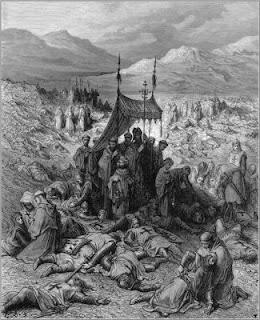 Paul Unwin (@pdunwin) made some excellent comments over at KQ regarding "Dragons: A Soar Spot."  Paul is a sharp observer whose opinion I respect, so I'd like to repeat his comments and my replies here, then enlarge on them just a bit.

Paul: "I think if I found myself DMing a situation like this and the PCs were clueless what to do, that I’d say “Look, two people are down and dying. Going by the book, the dragon can simply chase you down if you run. So, you can either die and roll up new characters, or you lose and you accept the results I impose on you.” Then I’d give them a few options, such as equipment ruined, nearby town laid waste, lost in a forest/cavern the dragon can’t enter, and/or now in service to the dragon."

Me: "The time to have a conversation with players about their options is before the fight begins, not when they’re running around on fire. ... Players push ahead with foolish ideas because they interpret a DM’s silence to be a sign that everything is going according to script. They assume that the DM won’t let them do anything lethally foolish. If they’re lining up to do something that looks lethally foolish and the DM isn’t stopping them, then it must be OK. They could even be excused for thinking this way if it’s always been true in the past."

Paul: I can’t agree. The DM (if not the rules of the game) has to allow for situations in which the PCs find themselves in over their heads either though bad choices (sometimes uncharitably called “stupidity”) or through bad dice rolls (which, if the PCs didn’t plan for them, is just another form of bad choice). One way, of course, is just to have the TPK and make new characters who somehow now know to make different choices. Another way is to allow the PCs to choose death or concessions. That the DM will be offering that choice can be mentioned up front, but the choice itself can’t be offered until it comes up."

Me: "A TPK should be the DM’s last resort. I’m not one who goes around yelling 'lop off their heads' if the players make a mistake. There are all sorts of creative alternatives to TPKs, most of which are better in terms of dramatic effect and player satisfaction than a party wipe.*

"Where we might differ is in how severe the consequences of foolishness ought to be. I'm willing to be pretty harsh. As a DM, I'm flexible enough to make a 180-degree turn in the story if the characters' actions merit that type of setback. Even if the PCs don't die, I have no problem saying 'you messed up; the princess is dead, the villain got away, the dragon burned the village to the ground, and if the king, the villain, or the villagers ever get their hands on you, you'll curse your mother for giving you life. She may be disowning you as we speak'.

"My experience is that a lot of DMs won't go that far because they've put a lot of work into building an adventure and they don't want to see it 'wrecked' by PC failure. I see every possible outcome as legitimate. The DM needs to be creative when the party gets into trouble--probably more so than at any other time--but he also needs to retain his impartiality, possibly more so than at any other time."

I bolded that bit about legitimacy because to me, it's the crux of the matter. Fantasy heroes do things that are inherently risky. The risk of failure--not necessarily death--is the source of in-game tension. The chips need to fall where they may, in both triumph and defeat. Both outcomes are valid. The players, not the GM, should determine which is achieved.

The GM should not interpret the failure of the heroes to achieve their goal as a failure on his part to create a "good" adventure. He certainly should analyze what he did and how he did it, just as he should after every adventure, and learn from it. But PCs can fail for a thousand reasons, only a few of which are the GM's fault. In fact, failure is a better springboard for further adventure than success is. The GM should grab that opportunity and run with, not try to mitigate it.

* Future note: I wrote a long blog about TPK alternatives that will appear in the summer print edition of KQ.
Posted by Steve at 11:17 AM