A Few (Almost Certainly Not) Final Thoughts on TPKs 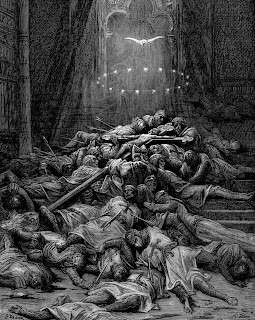 When old-schoolers and new-schoolers get talking about TPKs, I suspect there's a certain amount of rose-colored nostalgia at work.

It's certainly true that TPKs were more common in OD&D and AD&D than they've become since the latter days of 2nd Edition. But the notion that back in the day everyone shrugged off TPKs and character death in general as "just the way things are--take it like a man and roll up a new sacrifice to the slaughter god" rings a bit false.

Here's what I recall. Characters were fragile. Most of them claimed a spot in the bone orchard before they reached 2nd level, and it was no big deal. Rolling up a new victim took 5 to 10 minutes, and you might do it two or three times in an afternoon.

But once a character made it past the level 2 hump, he became something special. By 5th level, you took it hard if he clocked out, because that character represented months of play. Starting over at 1st level was a real kick in the teeth. You were out a heap of hard-won treasure and magic (some of the material goods might pass down to your new character--if any was recovered, if your new character was related to the dead one, if the survivors felt like sharing, and if the DM allowed it). Your replacement was way behind the rest of the party in XP, which meant spending a lot of combat rounds focused on just staying alive while everyone fought monsters that were too tough for you. A TPK was almost better--at least you were all in the same boat, but you were still upset about the loss. It wasn't a simple matter of picking up with new characters where the old ones left off, because the old ones had been operating down on the fifth level of the dungeon when they were handed their harps, and rookies would be instant monster snacks down there.

So I don't remember people laughing off the death of medium- or high-level characters back then with much more nonchalance than they do now. Low-level characters? Absolutely, they were disposable ciphers. But high-level characters, or any with outstanding stats such as a naturally-rolled illusionist or monk, was a rare bird whose loss would be felt deeply.
Posted by Steve at 10:17 AM