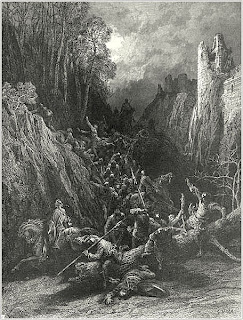 In other words, just about anything you think of can be put on a random "encounters" list. Good examples are often easier to find in board games than in RPGs. The D&D board games, for example, include excellent random events. They occur in board games far more often than you'd want in a roleplaying situation, but that doesn't diminish their value as examples.
Some of the items on the list above are fine adventure hooks, and indeed, they can grow into short or full-blown adventures. Why, then, would you put them on a random encounters list instead of treating them as scripted adventures in the first place? Because by letting them occur "naturally" as random encounters, the decision whether they are or aren't the stuff of an adventure is put in the players' hands instead of the DM's. This touches on a larger subject of randomness in scenario design, which I'll come back to in the future at much greater length (probably until you're sick of hearing about it).
The point I want to stress is the fundamental and huge difference between dropping events into the heroes' laps with a wink and a nod that says, "here's your next adventure," versus having small things happen around the characters from which the players choose their own paths to adventure. The ideal approach is a mix of both. You can have your ongoing story that stretches across months of real time with consequences that compel characters to action (or pull them along by the nose, in the worst case). But you should also sprinkle their path with minor events and encounters that can spice up the journey, distract the characters from their major troubles, let them solve the occasional small problem or interact with the world in ways that don't shake its foundations, give them a sense that they are steering their own course, and just maybe veer onto a path that everyone will find intensely satisfying while it lasts.
With that in mind, the final piece of advice is, don't lock yourself into thinking of random encounters as small and limited. Keep your mind open to all possibilities. If players determine to follow up on a random incident, let them. Be willing to let them lead for a while. It's their game as much as yours, and nothing sustains player interest as much as the feeling that they're steering their own destiny.
Posted by Steve at 11:43 AM